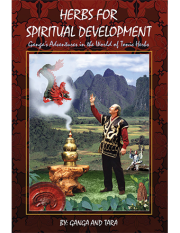 Ganga Nath was an apprentice to Ron Teeguarden just as Dragon Herbs was being formed at the turn of the century. At the time, he was known as Kris Kane. Ganga became the head elixir maker at Ron and Yanlin’s Kenter emporium. He made elixirs for some of the most well-known celebrities in the world including the likes of Joni Mitchel, Courtney Cox, Dr. Dre, Sumner Redstone and Woody Harrelson, just to name a few. The formulas were created by Ron, but the preparation by Ganga became world-renowned. He had his hands on the finest raw materials in the world. Ganga also traveled with Ron and Yanlin to China and on two occasions visited Changbai Mountain as photographer and student. This book, Herbs for Spiritual Development – Ganga’s Adventures in the World of Tonic Herbs tells the story of these visits to China’s most revered and holy herbal source, Changbai Mountain. In 2013 Ganga and Tara met up with Ron and Yanlin on a visit to the Shaolin Temple in China and to the Institute of Medicinal Plant Development (Chinese Academy of Medical Sciences botanical gardens) near Beijing, where Ganga told stories to Michael Beckwith, Jason Garner and Gabriel Cousens, who were on the trip with Ron, about those trips fifteen years earlier. Ganga has gone on to develop his own significant following throughout America as a Zen Tea Master and teacher of Vedanta. He and his wife Tara have lived for long periods in India and Taiwan, and now Northern California, where they have expanded their cultural range. Ganga is a true spiritual savant who has dedicated his entire life in the pursuit of spiritual wisdom. He is a blessing. Ganga has proven himself for decades to be an eloquent lecturer – his presentations are nothing less than breathtaking.-9