The Organ system in Chinese healthcare is completely different from that of the west. Throughout our literature, you will mostly see capitalized Organs. Sometimes you will see lower case organs. This is not a mistake. It is in fact intentional. The difference between the big “O” Organ and the small “o” organ is actually very significant.

The small “o” organ refers to the anatomical organs, as defined in western medical science.

Though the Chinese health system uses the same names for their Organs, their Organ system has gone beyond the boundary of anatomy. It describes the body as an integrated, functional unit based on the production, circulation, and utilization of Qi, in all its manifestations. By our modern standards, the Organs are really major functional systems. There is more emphasis in the traditional Chinese health system on the functional relationships of the organs than there is in general in the Western model. As defined in the Chinese healthcare system, the Organs include the anatomical organs and the whole systems of related functions, structures, tissues, emotions, and responses to the environment.

For example, the Liver’s orifice are the eyes, the negative emotion associated with Liver is anger. Now we know why the eyes turn red when a person gets angry. Ears are part of the Kidneys which store our life reserve (Jing) that determines our lifespan. Hearing is often the first to deteriorate when we age. More often than not, the functions associated with an Organ may not seem related at first glance. The Lungs include the anatomical lungs and skin. In the West, few people see the close relationship between these two organs. However, modern physiologists recognize the close relationship between the lungs and the skin, both of which evolve from the same embryonic tissue and both of which have respiratory and eliminative functions. The Kidney system controls functions such as the reproductive system, mental clarity, hearing, hair and the skeletal system. Again, modern physiologists can explain relationships between these functions based on neurological and hormonal interactions.

There are said to be six yin Organs known variously as the solid Organs, the viscera. There are also six yang Organs known variously as the hollow Organs. Each of the six yin Organs is paired with a yang Organ. The yang Organ is said to protect the yin Organ, while the yin Organ is said to nourish the yang Organ. Each of the Five Elements manifests as one pair of Organ-meridian systems, except for the element Fire, which manifests as two pairs: Heart-Small Intestine and Pericardium-Triple Warmer. The Organs-meridians are paired as follows.

The pair of Pericardium (Yin)-Triple Warmer (Yang) is not included in the illustrations in order to focus on the five Primary Yin Organs and their Yang partners.

The Yin Organ-Yang Organ pairing is accomplished by means of the meridians and internal channels. The meridians are linked according to what is known as the twenty-four-hour circulation. The meridians and the Organs are always filled with energy, but the energy moves like a wave through the meridians in a tidal rhythm so that throughout the twenty-four-hour day, each Organ-meridian dominates for a period of two hours (the high tide). The opposite two hours would be the low tide (AM-PM). The twelve meridians are but twelve divisions of one continuous flow of Qi, a flow that ascends and descends the body three times during each twenty-fourhour period. 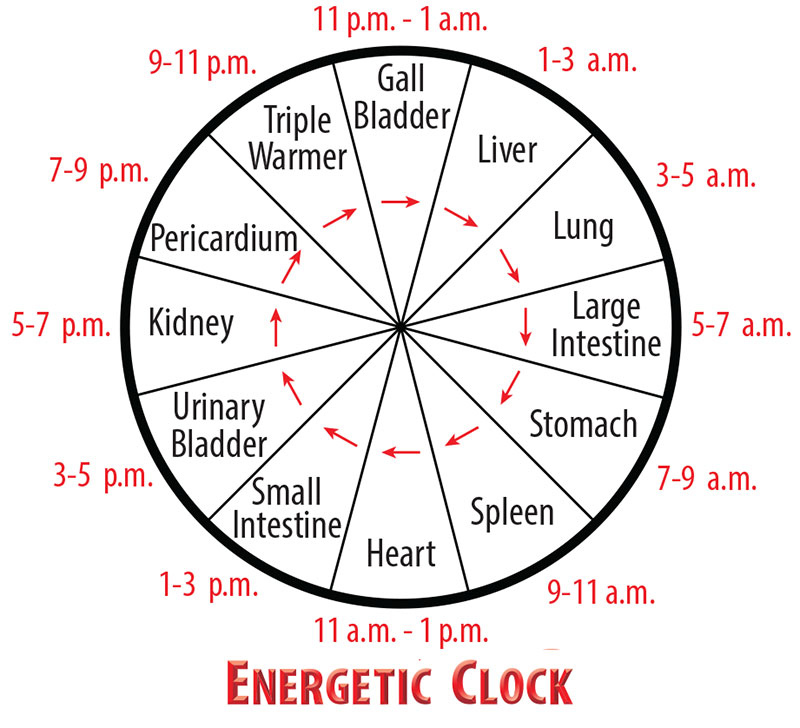 Your circadian rhythms can have profound impact on your well-being. The biological clock based on your Organ energy flow throughout a day can be very revealing to a watchful observer, such as your herbalist. Be sure to tell your herbalist about any interesting shifts in your energy during the day. For example, do you get sleepy every afternoon around 5 o’clock, or do you wake up every night at 2 a.m.?

The Yin Organs and Yang Organs are mutually benefiting, mutually constraining, and mutually dependent. When Qi, Blood and Body Fluid circulate smoothly and abundantly throughout the body, all the Organs form a harmonious unifi ed whole, and homeostasis can be achieved. 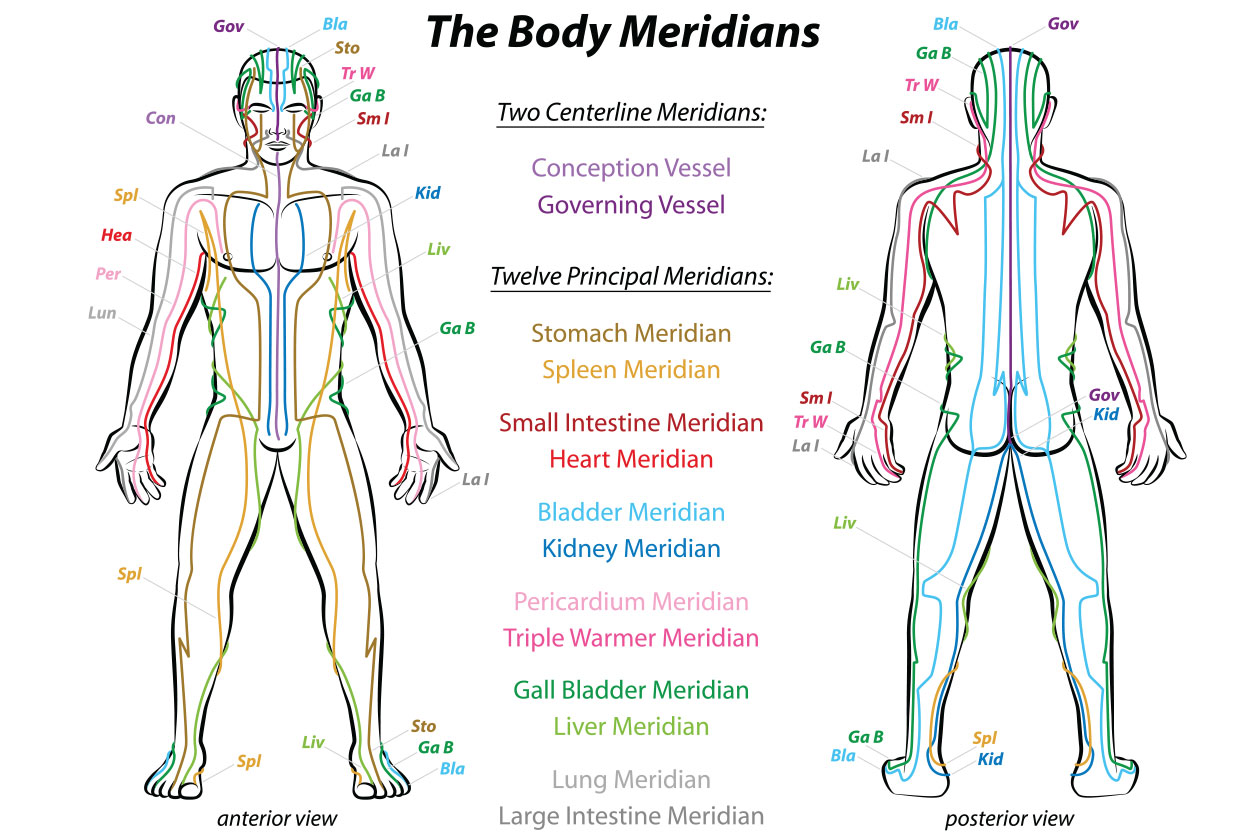 The meridians—a network of energy channels where Qi flows

The meridians are freeway-like networks of channels through which energy (Qi) and bio-data flow.

Meridians connect all the Organs together. The Organs constantly exchange all sorts of data among themselves through the meridians.

Meridians also connect the body’s internal Organs to the external environment. The meridians vibrate in response to even the smallest external change, informing the Organs of the change. The meridians sense the gross and subtle changes in such environmental conditions as the temperature, air pressure, humidity, light and other subtleties.

Each meridian is said to control the area through which it flows. This can be of great interest to you and your herbalist. If you experience tension, pain or blemishes on the surface of the body, it can indicate something important about what is going on inside your body. Tell your herbalist about any such observations.

The Chinese Organ/meridian system is unique and different from the Western model in many ways.

Here are a few key differentiations: 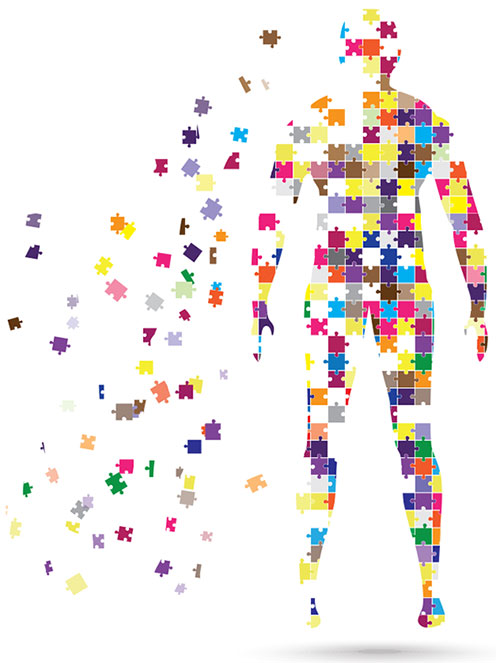 The Chinese Organ system is built on the foundation of the Great Principle of Yin-Yang and the Five Elements Theory. This model often produces unique results not yet explainable by modern science. It may provide some critical missing pieces in understanding the grand puzzle that is the human body, a master creation of mother nature.

2. Direct communication among the Organs

In the Western model, organs communicate with the brain directly and they are not connected to each other directly. In the Chinese model, direct communication among the Organs has been recognized for thousands of years, as illustrated in the meridian chart and the Five Elements’ Creation Cycle and Control Cycle. Only very recently has modern science begun to explore the direct linkage among organs. In the last decade, scientists acknowledge that the organs communicate with each other through chemical messengers.

Experiments have shown that a radioactive isotope inserted at an acupuncture point follows a course corresponding to the meridians described by TCM. According to human anatomy, these pathways are neither part of the vascular system, nor the lymphatic ducts, and the velocity of the radioactive message suggests that they are not transferred along the nervous system. Thus, the meridian channels are likely unique pathways, separated from the microcirculation, vessels, lymphatic ducts and nervous system. Some researchers deduce that they may be microscopic interstitial fluid channels. 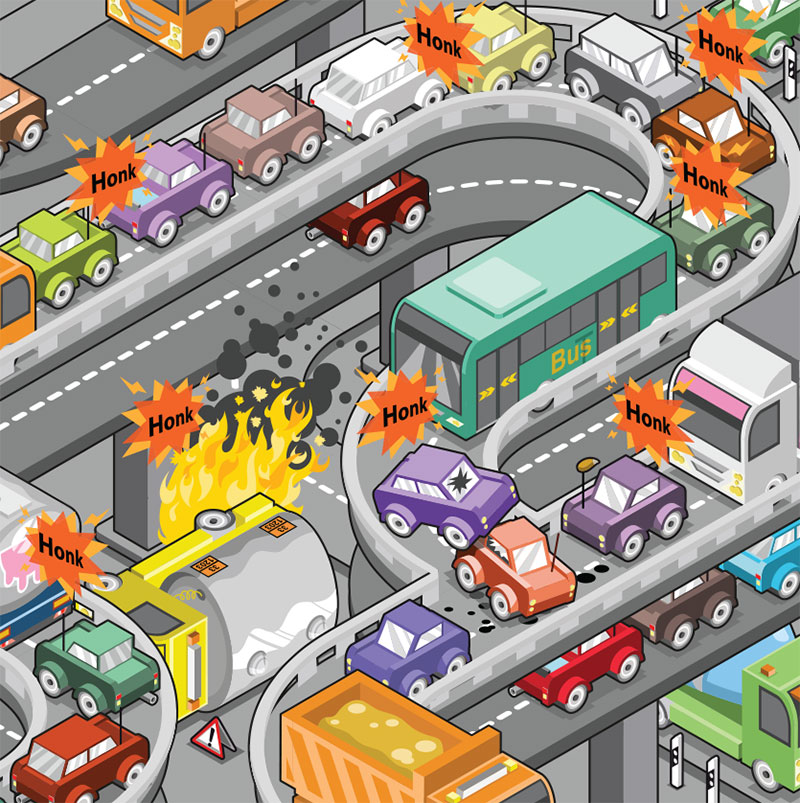 Unblock the blockage of the channels (“stagnation”)

Stagnation in our meridians is akin to a traffic jam. It can disrupt our normal functions in a significant way. Just imagine the chaos if our first responders (policemen, fire fighters, paramedics) are stuck in a traffic jam.

Blockage in the meridians (energy channels) will result in blockage of energy flow and important data flow throughout the body and will impair the proper functioning of the Organs. Therefore, much emphasis is placed on keeping the Qi flowing in the meridians. Herbally, many formulations can regulate the Qi flow and improve its circulation, such as the Bupleurumbased formulas. Acupuncture, Acupressure, Asian massage, Qi Gong and Tai Chi are all ways of regulating Qi and removing any blockage.

Perhaps the greatest distinction between the Big “O” Organs and small “o” organ is the way that the two systems handle psychology.

The Western system has attempted to separate the body and mind to as great a degree as possible. Of course, in the West, it is understood that certain physiological conditions can influence the mind, and vice versa. But to a very significant degree, mental and emotional disorders are not connected to specific organs or organic functions, and they are believed to be wholly centered in the brain.

The Chinese have always associated the emotions directly and intimately with the Organs. They do not perceive the emotions as being stuck in the brain as we do in the West. In general, the Chinese associate the emotions and related mental states to the Five Elements and to the corresponding Yin Organs of each Element. Every Organ embodies physical, functional and psychological attributes, thereby combining physiology and psychology into one Organ system. Traditional Chinese health principles emphasize the unity of the body and mind, commonly referred to as the “body-mind” today. For example, the Kidney can manifest a whole range of emotions - it is associated with will power, courage, acute or chronic fear and paranoia, depending on its vitality and Yin/Yang balance.

It is important to recognize that the body affects the mind and vice versa. The body-mind connection goes both ways. According to Chinese life-theory, the emotions are generated by the Organs. The brain (mind, psyche) plays a role in the grand emotional play, but the emotions are defi ned in terms of the Organs that manifest them. The emotions are a natural response to life, and the emotions themselves can be driving forces of the body.

Shen, the Spirit and the most refined of the Three Treasures, is the ruler of emotions. Shen resides in the Heart. Shen is more than an emotion. It is the vitality, clarity, and stability of the human spirit. It is a state of higher consciousness. Shen controls the emotions. When Shen is bright and in command, we primarily experience “balanced emotions” or “appropriate emotions.” When Shen is weak, blocked or disturbed, it ceases to rule the lower emotions. Emotional upheaval and related physical imbalances ensue, and the Yin and Yang emotional states arise. Each of the fi ve primary Yin Organs can therefore manifest a range of emotions. We call this the emotional spectrum. The table below provides some of the more common emotional possibilities related to the fi ve primary Organs.

When a chronically imbalanced emotional state controls the person instead of the “balanced emotions,” we leak Jing. The Organ meridians and the physical conditions are aff ected. Therefore, Chinese herbalism always takes both the emotions and physical status into account. It is perfectly normal to feel the Yin and Yang emotions from time-totime in response to life but holding onto an emotion is the root of unhappiness and imbalance of the body-mind. Learning to let go of any emotional attachment is crucial to our well-being. Taking Shen stabilizing or Shen opening tonic herbs can help stabilize the renegade emotions and help re-balance one’s emotional state.

Learn more about Yin-Yang, Three Treasures and Shen in their respective sections.

The Organs and Herbs

Tonic herbs are the primary herbs used in traditional Chinese healthcare to help maintain the health and functionality of the Organs, and to help them function harmoniously together.

The actions of Chinese tonic herbs are described in terms of which Organs they influence. They are described as “entering” a particular Organ channel, i.e. Heart Channel, Spleen or Lungs Channel. 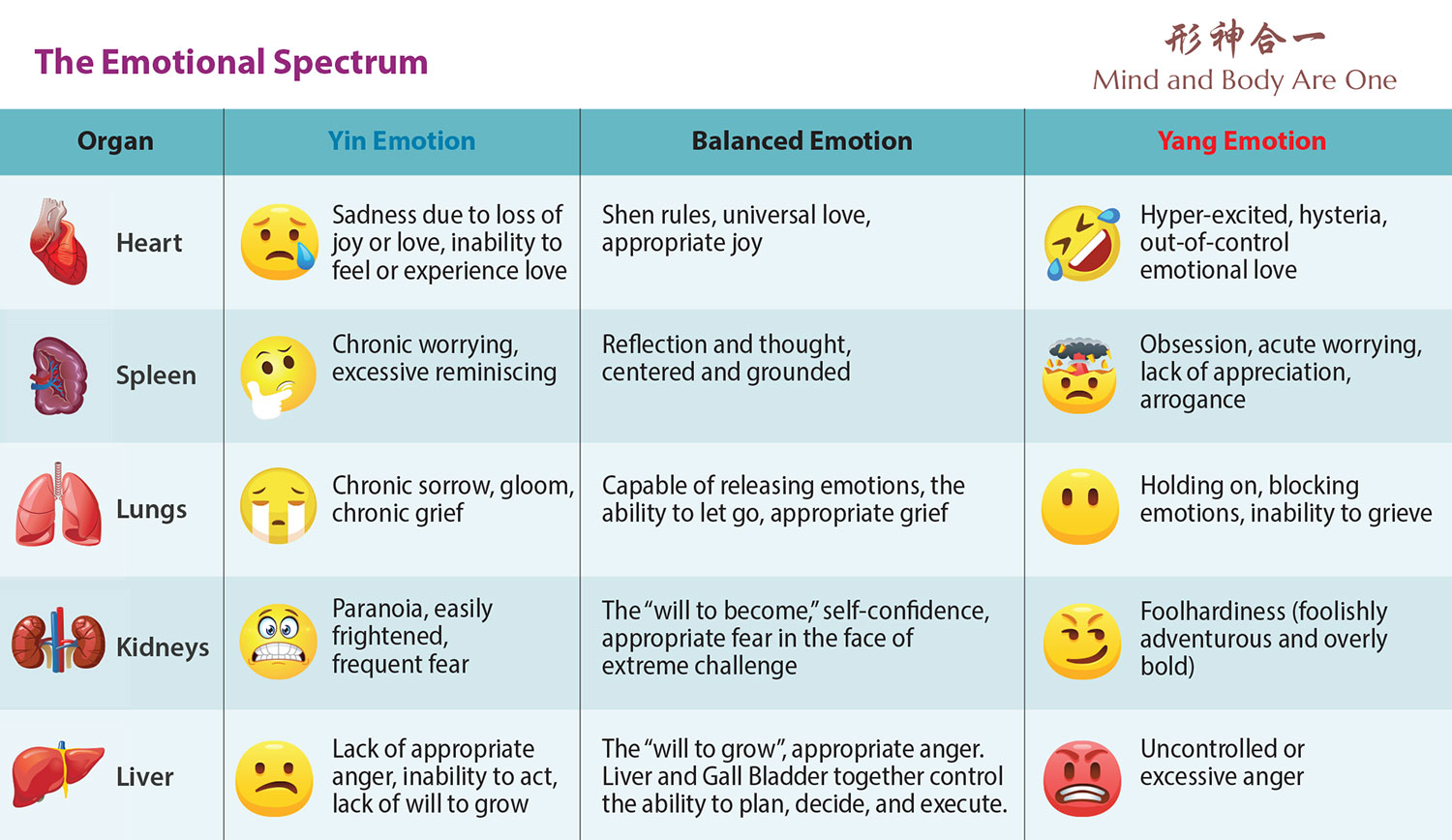 This educational material is provided under freedom of speech for your information only. It is not intended to substitute for the medical expertise and advice of your health practitioners from whom we encourage you to seek advice about treatment or care.

These statements have not been evaluated by the Food and Drug Administraton. This product is not intended to diagnose, treat, cure, or prevent any disease.