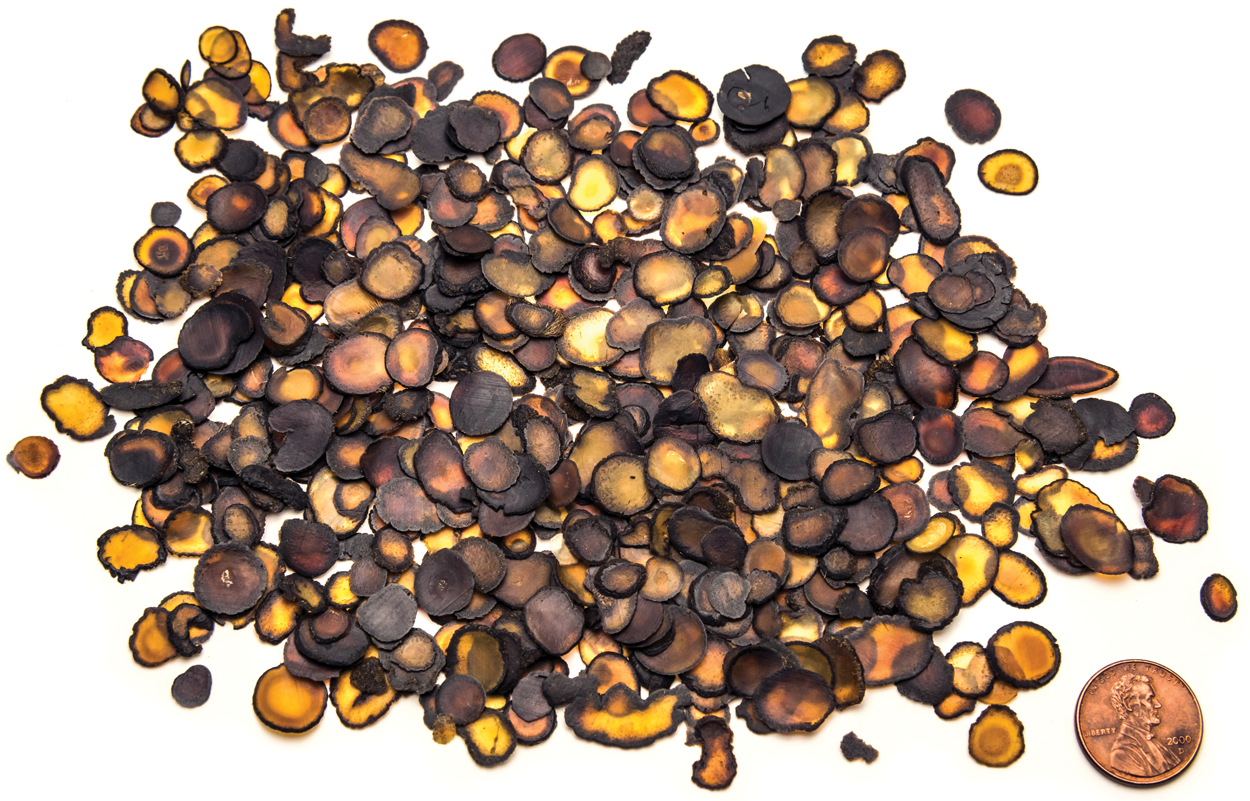 Deer antler tip slices. Dragon Herbs only uses the tips -- the last inch of the antler -- which is the living, nutraceutically active zone of the antler. Note the penny which shows how small the tips are. Also note the waxy, golden color. These tips are highly active.

Deer Antler is widely believed in the Orient, and by many around the world, to strengthen all aspects of a person’s life, and is considered to be an ultimate Jing tonic. It is a warm Yang tonic, although it is also known to provide Yin Jing. Deer Antler is also a major Blood tonic.

Deer Antler is the most precious and the most potent of the substances that fortify the Yang energy of the Kidney, Yang Jing. It is widely used in Asia to support adrenal, reproductive and brain functions. It is universally believed in the Orient to build and support sexual strength and to support virility and fertility. Like all Yang herbs, Deer Antler is used to support the energy and resilience of the back, ankles and knees. Deer Antler is considered to be the most powerful such agent and is usually the main herb in any formula in which it is included. 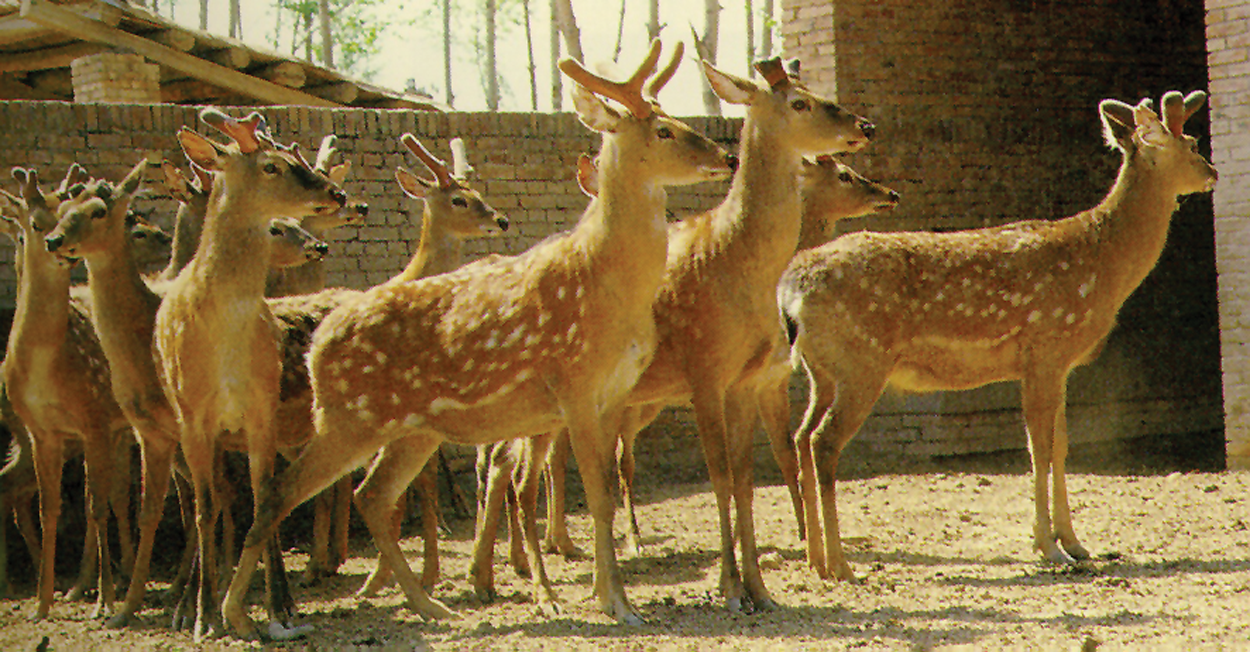 Dragon Herbs deer, just prior to antler collection. The deer are very well cared for and are allowed to roam wild during the day.

Deer Antler is used to build blood and improve circulation. The alcohol extract of Deer Antler has been found to benefit the cardiovascular system. Deer Antler is tonic to the marrow, which produces blood, including our white and red blood cells. Marrow tends to degenerate as we age.

Deer are not generally killed for their antler. The soft antler of the deer is painlessly removed from the deer when it has grown just two or three spikes and is still covered by velvet. The deer grow new antlers that same season and this second growth is not harvested.

The tip of the antler is the most potent part because it contains the most active substances. The “tip” is the last inch of the antler, which is the active growing part of the Deer Antler. 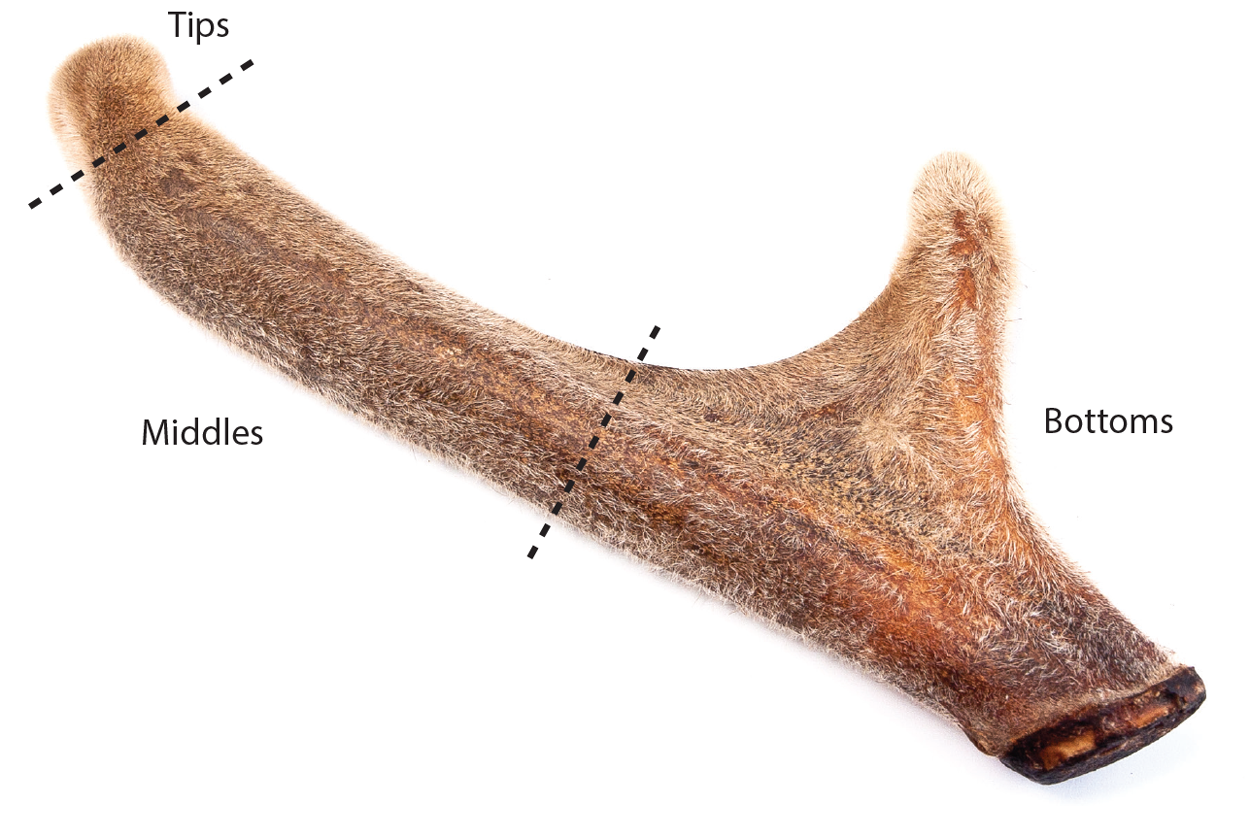 Most producers of deer antler products in America don’t even know the difference between antler “tips,” “middles” or “bottoms.” Tips are believed to contain about nine times the active constituents as the rest of the antler in total. Plus, only the “tips” contain stem cells. Most (perhaps all) other manufacturers that we know of DO NOT use tips to make their products. They often use the term “antler velvet,” though this is confusing to the buyer — the “velvet” is always removed from the antler because the velvet itself has no herbal, nutritional or nutraceutical value. The “velvet” is the fuzz that covers the antler when it is ready to use as a tonic herb, and thus the antler is called “velvet antler.” But it’s what’s inside the antler that counts. The tips contain a “wax,” that is loaded with bioactive substances. The more wax the better. Only the very tip of the antler is made from this wax.

Our strongest advice: use only extracts of deer antler made from the “tips” — the last inch of the antler. Dragon Herbs ONLY uses “tips” to produce all its antler-containing products. Never in our history have we used “middles” or “bottoms.” That is unparalleled in our industry. We concentrate our Deer Antler as far as concentration can go without the product turning into a hard waxy paste.