Nobody appreciates traditional herbalism more than we do at Dragon Herbs. The geniuses who discovered various herbs and invented herbal formulations have benefitted billions of lives. Traditional blending of components and processing techniques are nothing short of miraculous. And the work that has been done is continuing through the scientific and digital eras. Scientists are discovering how the herbs and superfoods work, where the best varieties come from and how to vastly improve processing and delivery systems. Our respect and gratitude for traditional herbalism is eternal. 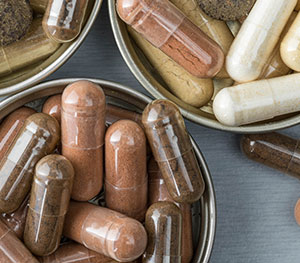 Herbalism in the 21stcentury is poised to take a giant leap forward. With the advances in modern research, chemistry and nutraceutical engineering, it is possible to extract potent, clean, effective and safe nutraceuticals from herbs. As a result, these nutraceuticals can be used to dramatically boost the effect of already-efficacious herbs.

These nutraceuticals then can best be used with their mother-herb in different proportions, or they may be added to different herbal extracts. While Western pharmaceutical science mainly focuses on the identification and isolation of single active constituents from plants that interact with single therapeutic targets, the tonic herbal system is primarily interested in maintaining a balance between the body and the environment. This harmony is believed to support general health and well-being. This often involves the use of mixtures of herbs, and in the Nutraceutical Herbalism™ line, nutraceuticals are blended with herbal synergistically related extracts. Altogether, these constituents contain multiple chemical groups and compounds with diverse biological actions. Only herbs and nutraceuticals that have been shown to be safe in humans are used in the Nutraceutical Herbalism™ line. The nutraceutical components are added to conventionally-used herbal extracts of high purity to boost the key activities of the formulation. The herbal extracts on the other hand, support the actions of nutraceuticals by providing co-factors and by harmonizing the functions of the formulation.

Compounds not only act synergistically with other compounds from the same plant, but also may enhance the activity or counteract the toxicity of compounds from other plants. For example Astragaloside IV, the main active constituent of the great tonic herb Astragalus membranaceus root, has been shown to be more effective when it is combined in a base of Total Astragalosides (all astragalosides existent in the Astragalus root) and a full extraction of all active components of Astragalus root.

Dragon Herbs currently produces a range of highly advanced nutraceutical-based herbal supplements for general use. Here are some of these formulations.